Gradually but surely during the post World War II years a counterculture began to find expression on Madison Avenue through a new creative generation, a rebellious coterie of art directors and copywriters who understood that visual and verbal expressiveness were indivisible, who bridled under the old rules that consigned them to secondary roles in the admaking process under the dominion of noncreative technocrats.
A new species of advertising art was becoming discernible. It was strikingly graphic and visually "alive." It was entirely different from what had gone before. A creative upheaval was gathering. force.

This new expressiveness was structured as a work method in 1948 when William Bernbach founded DoyleDane Bernbach. In his new agency, an art director and a copywriter worked as a creative pair. The idea of using artistwriter teams as the prime source of advertising was positively revolutionary. From this union the New Advertising was born.
Madison Avenue would never be the same.
The ereative rock on which Bill Bernbach built his new agency was the art director Bob Gage. Indeed, many of the ad industry's most gifted art directors, such as Helmut Krone and William Taubin, also homed in at DDB, where Bernbach had precipitated what advertising people now generally accept as the Creative Revolution.

【The one of famous works by DDB---Polaroid Land Camera】 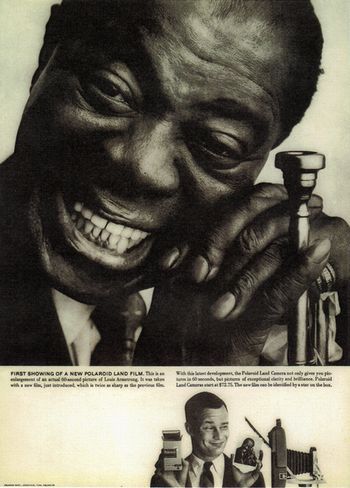 FIRST SHOWING OF A NEW POLAROID LAND FILM.
This is an enlargement of an actual 60-second picture of Louis Armstrong. It was taken with new film, just introduced, which is twice as sharp as the previous film. With this latest development, the Polaroid Land Camera not only gives you pictures in 60-seconds, but pictures of exceptional clarity and brilliance. Polaroid Land Cameras start at $72.75. The new film can be identified by a star on the box. 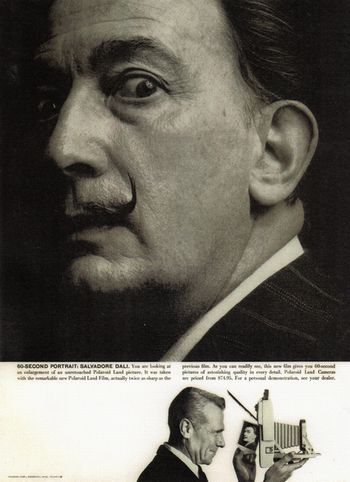 60-SECOND PORTRAIT: SALVADORE DALI. You are looking at an enlargement of an unretouehed Polaroid Land picture. It was taken with the remarkable new Polaruid Land film. actually twice as sharp as the previous film. As you can readily see, this new film gives you 6O-seeond pictures of astonishing quality in every detail. Piaroid Land Cameras are priced from 874.9. For a personal demonstration, see your dealer.