Mr. Dillon I like best is a campaign that we did for American Airline first class section about four or five years ago.
Four or five years ago, the difference in air fares between first class and coach from New York to California was about 45 dollars. This was pretty stiff. At that time, a number of corporations were trying to cut down their expenses and had asked their representatives to fry coach and save wherever they could.
We did a pretty heavy business with business travelers and we felt that we should promote our first class cabin. The question of how this extra expense could be justified became the tag of our campaign.
The first ad that we ran had the headline, "Why generals have a tent of their own." The reason was that a general needed the privacy to think and to plan for the battle. The ad went on to point out that the extra room and somewhat improved privacy did the same for men on important business trips. It was as important to a company as it is to the army that its representatives be at their best form. Why save a few dollars and possibly lose millions because a sale was lost or a meeting went badly.
We ran four or five of these ads and they received considerable attention.
As a matter of fact, our own agency then decided that at least vice presidents should fiy first class. I remember hearing that a number of other companies saw these ads eased up the travel restrictions for their own people. 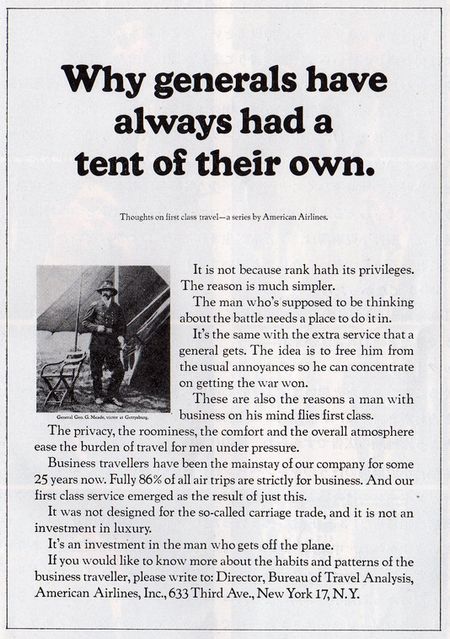 Why generals have always had a tent of their own.