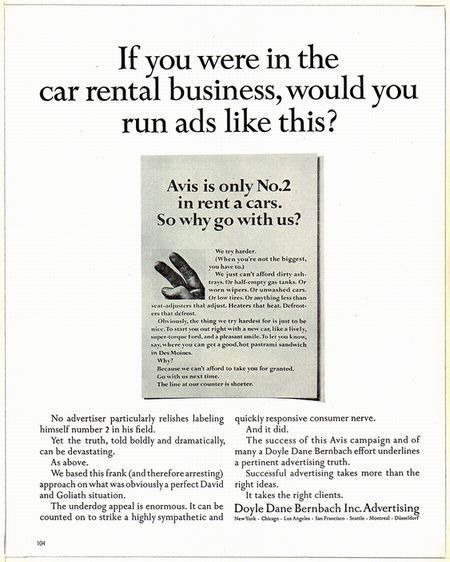 Mrs. Green I had been working at an agency and I had taken the summer off to join my husband in a job at children's camp. He had been working very hard. He had just finished school again. And the agency I had worked with would not give me a leave of absence. So I had had no job when I came back. At that point I called Ned Doyle. Actually I had known him at Grey Advertising, where he had originally been. I had known all these people and I had yearned to come work for them wears before. And he had suggested "You know our Mrs.Robison? Why don’t you see her?” So I had got my book together and I met Mrs.Robinso. And we strucked it off very well and she hired me. I was hired originally to work as a writer for the then Acrilan account which was a part of the Chemstrand account.
DDB was about twenty million dollars and I was probably one of 8 or 9 writers, I guess. We were not too many of us. And we were basically on two floors, art and copy on 25 and administration on 26. That's the size we are now in copy alone.

Mrs. Green 1956. And one of the nicest thing happened just when I was hired to come to work. I was joining them around Christmas. They always have an annual Christmas party. Mrs.Robinson, she was a copy chief at the time, called me and said "Look Paula. You are going to come to work for us, any way. Come to the party. So you can meet everybody before you start." So I started on a very happy, generous note, which by the way, I think has been true for the twelve years I have been here.

chuukyuu How many people were there when you came to DDB?

Mrs. Green I don't know. I think the Christmas party had 200 people something like that. I mean everybody, clerk, secretaries, writers, art directors, bullpen, account executives, the entire agency consisted of about 200 people.