chuukyuu Once you resigned from DDB, didn't you?
Mrs. Parker Yes, I did leave DDB for about 2 years. Like quite a few others, I was lured by more money and greater prestige. Then as now, a DDB creativ person is a valuable commodity in the market.
chuukyuu Would you please tell me the circumstances and the way people work, comparing DDB with other agencies.

Mrs. Parker The reason I came back is exactly because of that---because of the difference in the atmosphere and the way people work. You see, many agencies think they want a DDB writer or a DDB art director. They think the mere presence of this DDB person on their staff is going to result in brilliant advertising.
But, while they hired the man for what he can do, they won't let him do it. They don't want to change their way of operating. They still have endless levels of approval to go through---creative review boards and things like that. They say they want something startling---but when you give it to them they are afraid of it. If you give them a DDB-type campaign, it will end up so watered-down and innocuous you are embarrassed to have been the authorof it.
Today, of course, there are a half dozen young agencies rhat are doing brilliant work on their own. Quite a few of them, such as Wells Rich Green, Lois Holland Calloway, Tinker, etc., have been started by ex-DDB people, or have ex-DDB people in important, managing positions. And these agencies carry on DDB's tradition of permissiveness---well, let's say controlled permissiveness. I don't mean running wild. You must know what you're doing---but once you know it, you should have complete freedom within that area. But it never seems to work for an old-line conservative agency to bring in DDB people to work under the old system. I am holding my breath to sec what will happen with Ron Rosenfeld going to J･Walter Thompson. This time it may work, because JWT has, in fact, put Ron in charge of a whole new creative division. It is almost as if he were running his own agency, and it will be Ron who determines the atmosphere and the way people work. I hope it will be a huge success.
chuukyuu Do you think that copywriter, no matter how talented he may be, cannot fully express his talent if he happens to be in an agency with an undesirable atmosphere?
Mrs. Parker I think the answer is yes. I'd say to talent, the most important thing is the right clime in which that talent can flourish. You could liken that climate to Marshall McLuhan's "medium". If the medium is hostile, the message can't get through.
This is where Bill Bernbach, in my opinion, has made perhaps his greatest contribution. In establishing a "medium" here at Doyle Dane Bernbach in which people's talent can flourish. And that doesn't mean just people who think the same way he does. 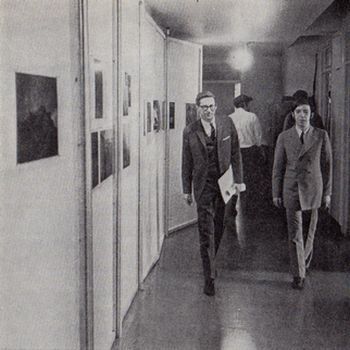 DDB's passageway as a gallery of works


He has allowed his creative people to create in their own way, and, in turn, the copy chiefs and supervisor have done the same. I believe this is what is responsible for the fact that DDB is still bright and fresh after close to 20 years in the business. We're not a young agency any more. Twenty years is a respectable middle age. And a lot of people bemoan the fact that we are not rebels, and image-breakers any more.
But I feel, on the contrary, that it's astonishing that we're still as fresh and innovative as we are, at the ripe age of 20. And it's only right and proper that we have sown our seed through the advertising world and have fathered that whole new generation of image-breakers like WRG, etc.
chuukyuu I understand what kind of agency is a suitable and desirable place for a copywriter to work. But is there any other factor except "controlled permissiveness?"
Mrs. Parker There are, of course, other factors. A good salary, position, title, and so on. And in this area we have not always done the right thing. In the early days, DDB traded on its glamour image. People were beating down our doors to work here, and we thought, "Great, we can pay them very little money, and they'll still come."
But often that would backfire. People would take cuts in salary to come and work for us, but once they were securely established at DDB they were unhappy about the cut. At the same time, the temptations would start coming in from outside. It is not unusual even today for a DDB person to be hired away at double his DDB salary.
But on the whole, our salaries have now been brought into line with the market average. We still do not pay really top prices for creative talent. I guess DDB people still feel they get part of their compensation in terms of "atmosphere".
Perhaps I should add here that American employees do not get the fringe benefits of entertainment and compay-paid travel, etc. that are customary in Japan.