I nterviewer: You've published several novels and many short stories. Were you a fiction writer before you got into advertising?

Dillon: Not a published writer, no. I started writing short
stories at the age of 15, but I didn't sell my first one till I was 33.
Fiction writing has always been strictly a sideline.

Interviewer: Which do you consider more difficult? Writing fiction or writing copy?

It's up to you to make up a story about people that other people will want to read.
You have to devise a plot, find a way to make its telling entertaining and bring your story to a good ending.
Unless you're writing a formula story, like a detective story, this can be pretty tough.
Writing copy is easier because, however you do it, you at least know where you're going. The plot is a proposition the client wants to put over.
How you do it is still up to you, but at least one of the jobs has been taken out of your hands.

Interviewer: Has your fiction writing had any effect on you as a copywriter?

Dillon: Well, the first thing to remember is that they are two
very different kinds of writing.
For a long time, the model of copywriting was consjdered to be Volkswagen copy, which is very mannered writing.
It's written to be very effective in the space that it's in, which is about one-third of a page.
However, two hundred pages of VW copy would drive you up the wall.
There are occasional devices that are effective in both forms.
For example, short sentences and short paragraphs make for easy reading.
And they even make the book or story more attractive to somebody before they read it, because all that white space makes it look as though it's going to be easy to read.

Interviewer: Has copywriting had an effect on your fiction writing?

Dillon: Yes. It's made my fiction writing much tighter.
I once wrote a Western novel in the first person.
The publisher said it was too long and long stories cut into his profits and he said he was going to cut it.
When the book came out, I asked him how much he'd cut and he said six words.
The word in each case was "well." One of the characters kept starting sentences with "well."

Interviewer: Your copy doesn't seem all that terse.

Dillon: I'll throw in a friendly aside from the manufacturer from time to time mainly to make the consumer feel that this is a company run by people and not computers.
Volkswagen has done this, perhaps better than anybody.
But they don't have the franchise on it anymore.
This is something I did on American for quite a while.
American was quite good about it.
The only thing they objected to was our ending sentences in a preposition.
We'd send over copy and it would come back with a little note: "Mustn't end sentences with prepositions."
Then we'd send over a stat of a page from Fowler proving that prepositions were perfectly swell to end sentences with. And they'd say: "Be that as it may, a sentence must not be ended with a preposition."
We had a running war for two or three years but I think we finally beat them down. 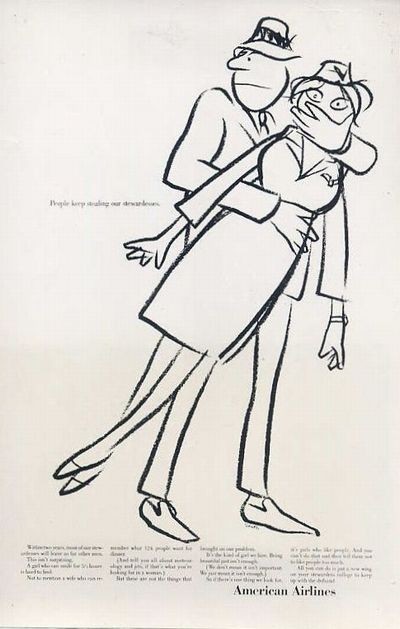 Within 2 years, most of our stewardesses will leave us for other men.
This isn't surprising. A girl who can smile for 5 hours and half is hard to find.
Not to mention a wife who can remember what 124 people want for dinner. (And tell you all about meteorology and jets, if that's what you're looking for in a woman.)
But these things aren't what brought on our problem. It's the kind of girl we hire. Being beautiful isn't enough. We don't mean it isn't important. We iust mean it isn't enough.
So if there's one thing we look for, it's girls who like people.
And you can't do that and then tell them not to like people too much.
All you can do is put a new wing on your stewardess college to keep up with the demand.

(to be continued to tomarrow.)