<<An interview with Mr.Jerry Della Femina(1)

chuukyuu Please name two of your ads which you like best. Moreover,
please describe the reason for choosing them, some interesting episodes
attached to them and the reaction of the audience as a whole.

Mr.Femina Well, the first ad I like best is for Talon Zippers.
Talon is a company that makes men's zipper.
We had to do an ad that told people that the zipper always stayed up.
It's a very difficult subject to talk about.
The reason why I like the whole feeling of the ad is that we were able to take a subject that you could be tasteless about and make it into a funny, humorous situation.
What we did is we took a picture of little boy on a pitcher's mound and he was worrying about playing baseball and he worried about why the catcher coming out to see him.
The catcher wasabout to say something and the pitcher was saying, "He's going to tell me that my fast ball isn't working and he's going to tell that I'm in trouble. What's wrong with me?"
And the catcher walked over and whispered,
"Your fly is open.",
and walked back again. 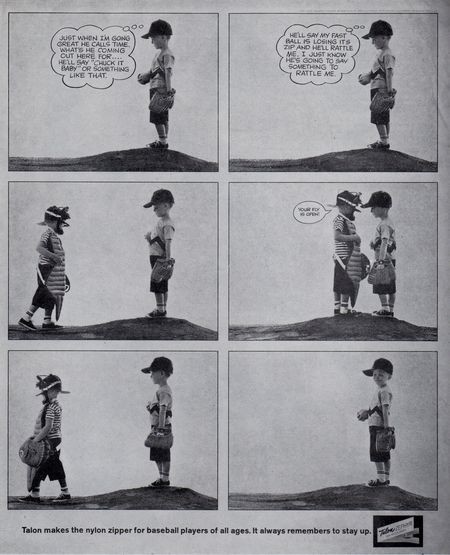 "JUST WHEN I'M GOIJNG GREAT
HE CALLS TIME, WHAT'S COMING
OUT HERE FOR...
HE'LL SAY " CHACK IT BABY" OR
SOMETHING LIKE THAT."

"HE'LL SAY MY FAST BALL IS LOSING
ITS ZIP AND HE'LL RATTLE ME.
I JUST KNOW HE'S GOING TO SAY
SOMTHING TO RATTLE ME. "

chuukyuu That ad was on even in subway.

Mr.Femina Yes, it was well represented all over the place. The funny part of this ad is, I worked this with an art director and the two of us never remember how we did it. We suddenly started and got so excited about it.