chuukyuu You have been working for first rate agencies such as DDB, Jack Tinker and Wells, Rich, Greene. Do you think whether a copywriter can fully develop his talent or not heavily depends on what agency he is with?

Mr. Moss It certainly helps to be with a good agency because obviously no matter bow good you if your work does not get through, isn't seen or isn't bought by the client or isn't appreciated by the agency, for that matter, you will consequently get very discouraged and it will probably affect whatever you do in the future.
I have known or heard about a lot of writers and art director who did not do great work when they were at certain agencies, but the minute they moved to an agency like this onc or Carl Ally or Tinker orDoyle Dane Bernbach, suddenly blossomed and did fantastically good work. So I think it can be proved that a good writer can be held back by a bad agency, although I dont' think a bad writer can be saved bv a good agency---.

Mr. Moss No. Some of the best are completely incapable of teaching good copywriting. Bob Levenson was an excellent teacher.
But I am sure there are many fine copywriters who are not good teachers, and partly that is because there is a tendency on the part of anybody who is in any kind of creative field to try to impose his style or method of working on someone else and I think that is the first big mistake.
The best, I find, the best way to work is to try to keep away, try to let people work within a framework of supervision but not to get too oppressive about it ...

chuukyuu What is your philosophy on good writing?

Mr. Moss I don't think there is such a think as good copywriting without good idea.
Unless an idea you are writing to is very strong you will have a lot of trouble writing good copy to it. And I think the reverse is true. A strong idea can bring out the best in anybody because it is usually very easy to write to.
I don't think that I have a philosophy on good writing except that when you sit down at the typewriter you have to really believe in what you are doing. In fact almost you have to overbelieve and I find if I can hypnotize myself into overbelieving about a product my stuff comes out much better than if I had a sceptical point of view.

chuukyuu How do you observe future development of advertising in America?

Mr. Moss I think as television comes more and more important to clients they will begin to move toward the idea that you have got to present people with something worth listening to or looking at, and that should come out of the product. It should
entertain in order to keep people watching and a[ the same time get the message across.
I think that the young people that are coming into this business are going to be affected by the kind of renaissance we are having in film in this country.
Everybody is a film maker today. People are very interested in film and that is going to affect the young writers and art directors that come in. They are going to be much more conscious about the medium and much more knowledgeable about how to use it.... 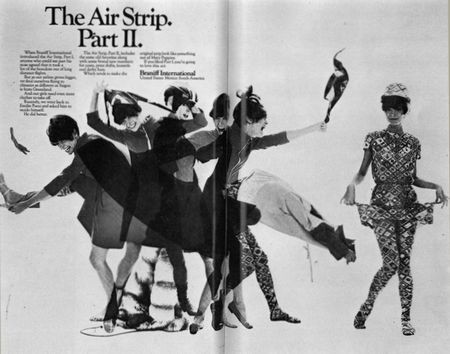 
When Braniff International introduced the Air Strip, Part ?, anyone who could see past his nose agreed that it took a lot of the boredom out of long distance flights.
But as our airline grows bigger, we find ourselves flying to climates as different Saigon is from Greenland.
And our girls need even more clothes to take off.
Recently, we went back to Emilio Pucci and asked him to outdo himself.
He did better.
The Air Strip, Part ?, includes the same old favorites along with some brand new numbers: fur coats, print shifts, leotards and derby hats.
Which tends to make the original strip look like something out of Mary Poppins.
If you liked Part ?, you're going to love this act. 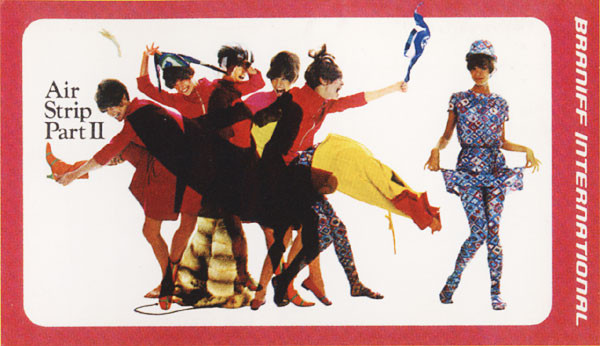 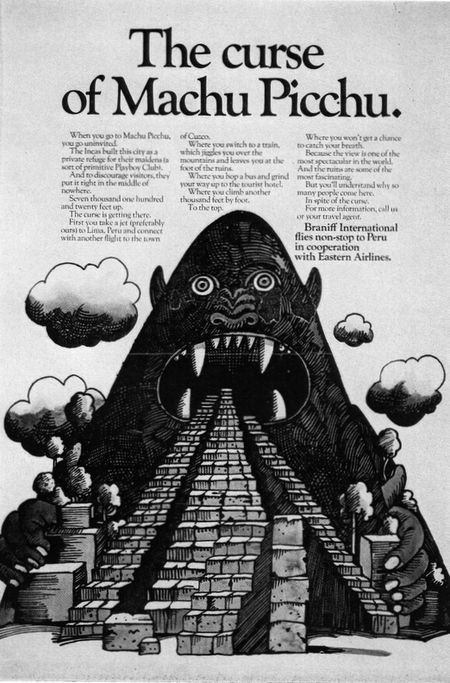 The curse of Machu Picchu.

When you go to Machu Picchu, you go uninvited.
The Incas built this city as a private refuge for their maidens (a sort of primitive Playboy Club).
And to discourage visitors, they put it right in the middle of nowhere.
Seven thousand one hundred and twenty feet up.
The curse is getting there.
First you take a jet (preferably ours) to Lima, Peru and connect with another flight to the town of Cuzco.
Where you switch to a train, which jiggles you over the mountains and leaves you at the foot of the ruins.
Where you hop a bus and grind your way up to the tourist hotel.
Where you climb another thousand feet by foot.
To the top.
Where you won't get a chance to catch your breath.
Because the view is one of the most spectacular in the world.
And the ruins are some of the most fascinating.
But you'll understand why so many people come here.
In spite of the curse.
For more information, call us or your travel agent. 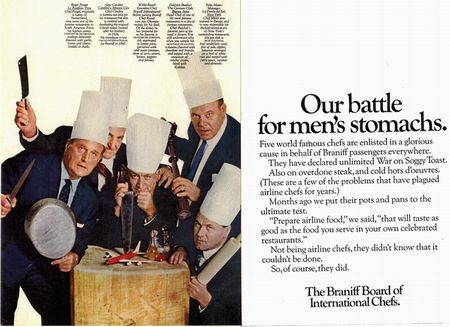 Our battle for men's stomachs.

Five world faIhous chefs are enlisted in a glorious cause in behalf of Braniff assengers everywhere.
They have declared unlimited War on Soggy Toast.
Also on overdone steak, and cold hors d'oeuvres. (These are a few of the problems that have plagued airline chefs for years.)
Months ago we put their pots and pans to the ultimate test.
"Prepare airline food," we said, "that will taste as good as the food you serve in your own celebrated restaurants."
Not being airline chefs, they didn't know that it couldn't be done.
So, of course, they did.