chuukyuu I understand that prior to your start as a copywriter you were driving a truck. But is it true that you walked into PKL to sell your idea for Piels Beer TV commercial? 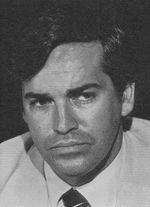 Mr.Holland I was driving an ice cream truck and I sold it the day I started to work at PKL. I really didn't have any ideas for beer TV commercials. I didn't even drink in those days. (I'm told I've made up for it since then.)
chuukyuu At this moment, please tell us briefly about your career history.
Mr.Holland I was born in a town called Pawcatuck. Connecticut. I livedthere until I was 20 when I went to the University of Connecticut. I was there for four years and was drafted out in my senior year and went into the Army. (I was a trained killer. I can't tell you anymore about it. because it's top secret. and I'd have to rip your tongue out afterward.) When I left the Army, I went to work for a company called Consolidated International Electric Construction Company Incorporated. I bet they formed it just to take the longest names they could and string them all together. We rewired the Panama Canal, changing it from 25 to 60 cycle. At one point. after I'd been there nine months, making sure all new equipment got down there, Bob LeVine, a great friend of mine who was in charge ()f the job. turned to me and said, "How is the shipment on the Pedro Miguel Locks?", the first series of Locks in to the Panama Canal. I looked up from my charts and said, "Bob, it's all down there, everything." So Bob picked up the red phone, which was the Cable Line to the chief engineer and he said, "Miller, Ron Holland says it's all right. You can shut down the Panama Canal." So I quit the next day. I knew I could never do anything that good again.
Then I bought my own ice cream truck and drove for three years and when I finished with that I went to Papert, Koenig, Lois.
chuukyuu While you were with PKL, was there someone who taught you copywriting? And how?
Mr.Holland Yes, there were four people who taught me copywriting. One was Julian Koenig, the best copywriter in the business, and one of the nicest men I've met in my life. Fred Papert who wrote the most gracefel selling copy I've ever read, and still does. George Lois is also an excellent copywriter. A man named Monte GhertIer writes wonderful copy absolutely effortlessly. PKL was a wonderful generous, happy place to work.
chuukyuu And how did they teach you?
Mr.Holland Julian Koenig's lesson was that if you write an advertisement and you read it and it makes you want to puke, you know it's probably a bad ad. Fred Papen always said: "Tell the truth and make it interesting." Monte Ghertier, by just saying, "That's no good. Sit down and write something better." All excellent teachers.
chuukyuu This means it depends upon your ability rather than so-called conventional type training.
Mr.Holland Yes. I don't think there's a way to ... I think there is a way to learn some rules about copywriting but Julian Koenig used to say, "If you are in a bar and someone says, 'Tell me about your product,' and you talk to the guy;'Well it does this or this or this,' that's the way to try to write. It's as convincing and clear and objective."
chuukyuu Do you feel any difference in the way you work on your ads between the time you were at PKL and today at your own agency?
Mr.Holland I hope I am a better writer now because I keep working at it. I'm trying to improve. vVhen you have your own agency you have more responsibility. You develop more confidence in your work and I suppose the responsibility makes you work harder and really try to figure out how to sell the product, how to keep selling, selling, selling.