Starting from zero, PKL grew to a forty million dollar agency in seven years. Consistent with his unorthodoxy, Lois became the first modern art director to launch a "big business." And-in 1962, PKL became the first modern ad agency to go public.(Old established agencies later followed this brash creative shop's excursion into capitalism.) The Lois breakaway demonstrated to creative men and women in the ad world that it was possible to lay one's talents on the line and become a commercial success. Other creative agencies quickly proliferated, following PKL's example, and many flowered. In 1963, Lois was named Art Director of the Year by the New York Art Directors Club. The previous recipient, his former boss Herb Lubalin, observed at that time, "Nobody has the right to be so young and so successful. "
In 1967 the restive Lois left PKL with copywriter Ron Holland and marketing man Jim Callaway to start all over again. PKL had grown too fat and comfortable for his tastes; Something, he felt, probably their having become a public corporation, had altered the soul of his wonderfully successful agency. "I'm thirty-five and too young to die," was his parting shot.
His new ad agency, Lois Holland Callaway, was soon repeating the rapid success of PKL. In 1969 Ad Age named Lois as one of 1968's top ten newsmakers. (He was the only art director among the ten, which included one Robert Haldeman of J. Walter Thompson, who was recognized by Ad Age because he "helped put Nixon in the White House.") In 1971, he was elected president of the New York Art Directors Club. In 1972, Lois completed his tenth year as the art director who created those brash and prophetic covers for Esquire.

【Mr.Julian Koenig(copywriter) created ad for Peugeot at PKL. First he had created ad "Think small" for VW at DDB】 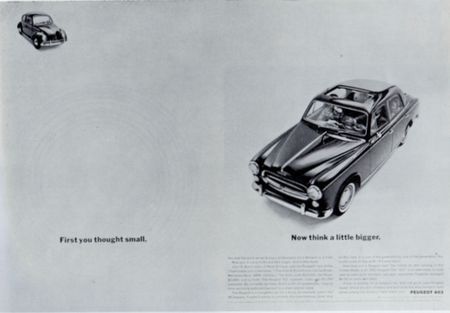 You had the good sence to buy a Volkswagen (or a Renault or a Fiat).
Now you're ready to think a little bigger . And a little faster.
John R. Bond, editot of Road & Track, calls the Peugeot "One of the 7 best made cars in the world" (The other 6, Rolls Royce, Lancia, Rover, Mercedes Benz, BMW, Ca\dillac.) The Rolls costs $15,665, the Rover $3,695. and so forth. The Peugeot 403, however, costs only $2,250 complete. By complete we mean $365 worth of accessaries, ranging reclining seats and sunroof to a silent electric clock.
The Peugeot is a thoughtfull car (its 4 doors for example, open a full 90 degrees, it seats 5 adults in comfort). It is commodious. Quiet. And on the road, it is one of the great driving cars of the generation.You could cruise all day at 80 (if it were legal).
How long will a Peugeot last? The oldest car still running in the United States is an 1891 Peugeot. The "403" is so well made, it costs $6.50 on parts and labor.
If you're looking for a compact car, why not go to your Peugeot dealer (there are 422 of them) and test drive the only compact numbered among the world's 7 best made cars,