A guide to George Lois(1)

(From the widely praised introduction by Bill Pitts to the widelypraised the Art of Advertising by George Lois. Pitts and Lois have worked together in three agencies that have borne Lois'sname, including the maverick art director's newest agency. Lois Pitts Gershon.)

Everything begins with the word, especially with George Lois, an art director by craft, an advertising man by profession. He has stretched the limits of his craft and challenged the ways of his profession by using pictures as words, words as pictures, and pictures with words as no creative personality before him.
He has pushed the role of art director from artisan of design to the shaper of ideas. He is probably America's most resourceful art director and surely its most prolific. If onc can agree with Marshall McLuhan that "historians and archaeologists will one day discover that the ads of our tme are the richest and most faithful daily reflections any society ever made of its entire range of activities," the work of George Lois says volumes about America of the fifties, sixties and seventies. 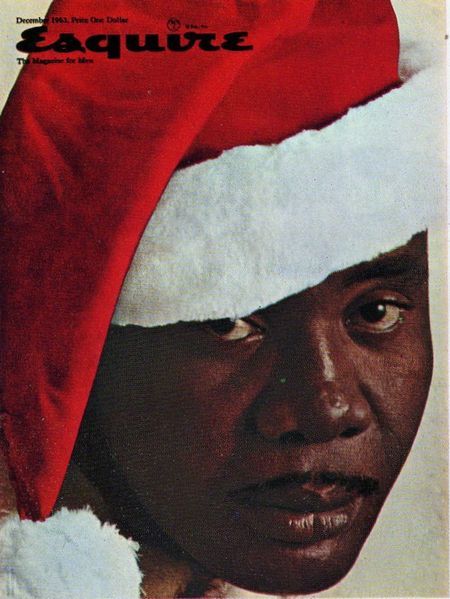 His 1963 Esquire cover of Sonny Liston as Santa Claus (note the prehistoric year) has been called "one of the greatest social statements of the plastic arts since Picasso's Guernica." 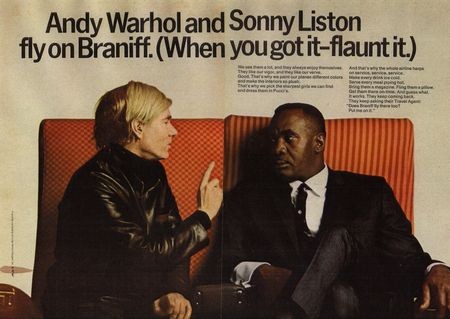 His 1969 campaign for Braniff gave to the language, for better or worse, "When you got it, flaunt it!"
His passionate, volunteer 1975 battle for Rubin Hurricane Carter made Lois a lightning rod that drew down bolts of criticism from friends and colleagues and clients. Disarming, disturbing work that keeps piercing the curtain of communications overkill.
Is it advertising?
Is it commcrcial art?
It it commercial?
Is it art?
It is certainly Vintage Lois, the pointed meSsage that riddles our defenses and roils the juices, an artful distillation of words plus an eloquent use of images. It is one of the clearest ways to make a point in a media-blitzed culture.
George Lois is the son of an immigrant Greek florist whose name was Haralampos. Vasilike was his mothcr's name. His two older sisters arc Hariclea and Paraskeve. He was born and raised as a true Greek Orthodox youth (including membership in The Sons of Pcricles) in the Irish Kingsbridge section of the upper Bronx, between the shadows of the Broadway 1.R.T. el and St. John's Catholic Church.
Endowed with a Rabelaisian memory ("Don't bullshit a bullshitter" is one of his maxims), Lois recalls his coming of age amol)g the Irish as a ten-year donnybrook that left half the male Gael population of the north Bronx disfigured with broken noses and, to be sure, with a grudging respect for the Greek outlander. ("I count nine broken noses of my own," he swears.)