When Sony brought its account to DDB it too seemed like a real challenge. They brought to us a very fine product. One which we felt we could do an exciting job for. We tried to find out everything we could about their products. We studied the competition. All the competing ads seemed to look alike. One ad blended into the next. One television set looked like another television set; one radio looked like another radio. Everybody was showing big pictures of their product and gave some information about it. Sony was a new company and we wanted it to stand out. We went exactly in the opposite direction of the competition. We wanted warmth and humanity. We also wanted to make our point by using an exaggeration of the truth concerning the television watching habits in America. (The All-American sport.) But not just an exaggeration -- one that amplifies the selling points of the product. Now that's important.
What does Sony product have to offer? True portability, true lightness of weight. The ability to take the set where you want it to go -- not to have to go where the set is. You own the set, it doesn't own you. American manufacturers were selling portables that really weren't portables at all. They were floor models with handles on top. American manufacturers were selling portables that had electric cords plugged into the wall. Sony had a true portable-transister and battery-pack, lightweight and fun to use. And that's what we took off on. 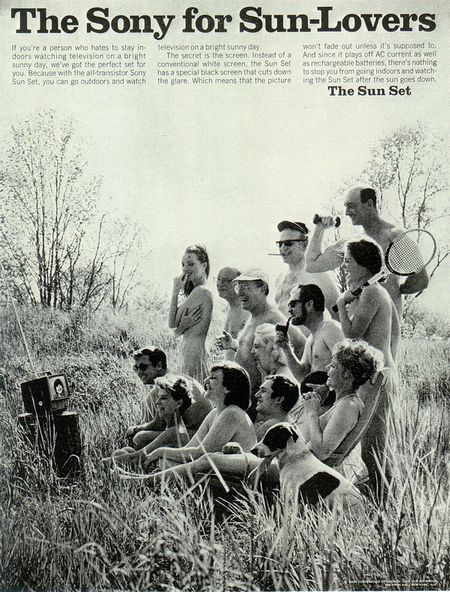 The Sony for Sun-Lovers

If you're a person who hates to stay indoors watching television on a bright sunny day, we've got the perfect set for you. Because with the all-transistor Sony Sun Set, you can go outdoors and watch television on a bright sunny day.
The secret is the screen. Instead of a conventional white screen, the Sun Set has a special black screen that cuts down the glare. Which means that the picture won't fade out unless it's supposed to. And since it plays off AC current as well as rechargeable batteries, there's nothing to stop you from going indoors and watchingthe Sun Set after the sun goes down.
The Sun Set 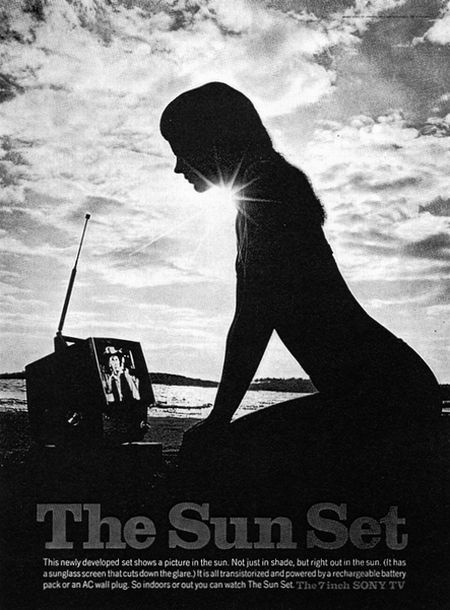 This newly developed set shows a picture in the sun. Not just in shade, but right out in the sun. (It has a sunglass screen that cuts down the glare.) It is all transistorized and powered by a rechargeable battery pack or an AC wall plug. So indoors or out you can watch The Sun Set.
The 7 inch SONY TV 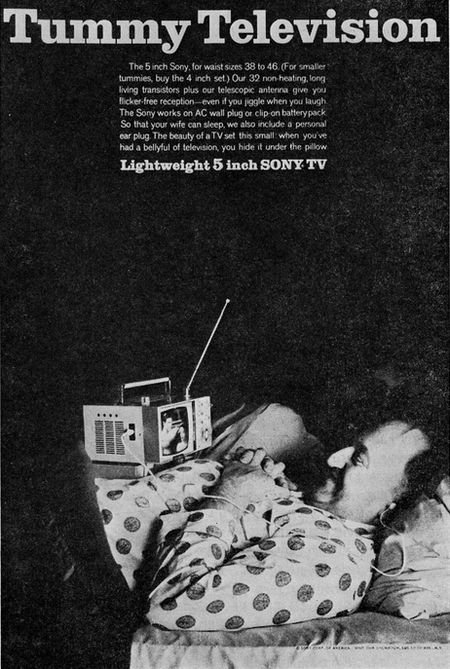 
The 5 inch Sony, for waist sizes 38 to 46 (For smaller tummies, buy the 4 inch set) Our 32 non-heating, long living transistors plus our telescopic antenna give you flicker-free reception---even if you jiggle when you laugh. The Sony works on AC wall plug or clip-on gattery pack. So that your wife can sleep, we also include a personal ear plug. The beauty of a TV set this small when you've had a bellyful of television, you hide it under the pillow.
Light-weight 5 inch SONY-TV